Thank you for your letter. I admit I read it with some dread, the terrifying experience of a safe conceptual invention given undeniable, implicating, form. I love our morning coffee conversations (or symposia as I’ve taken to calling them), but this takes that spirit and gives it a body, a body which can be seen.

You write that “religion and spirituality used to make us both uncomfortable”. I would say from my perspective that they still do! I have become much more open to meditations on the nature and value of spiritual experience, but as you know I still grapple with the relationship between spiritual metaphor and Truth. I find engaging with it in a quasi-public/permanent form like this immediately makes me want to write out a large series of caveats on how precisely I integrate those perspectives into a relatively coherent personal worldview.

BUT I will resist, for this letter at least. The nature and structure of reality is of course a favourite topic of the FàD and so I’m sure that we’ll get back to it later.

I love your concept of generative conversations, ones in which you don’t know precisely what you’re going to say until you’ve said it, ones where each word holds risk as it unfurls you into the unknown. These kinds of conversations are the bedrock of our relationship, of course, but seeking them in other spaces is a practice that I seek to develop further. Trusting your interlocutor enough with your partial, perhaps foolish, perhaps changing, ideas is a radical act, especially so in an ambient cultural environment where all too often we look to write people off for the errors (perceived or genuine) in their thought.

I would like to foster this generative energy in our exchanges here. My commitment to you is to not know exactly what I’ll write until I’ve written it, my commitment is to trust that you’ll read generously and in good faith, while not being afraid to disagree even passionately.

You’ll recall when we organized “safe ghost space”, a storytelling night with a few friends where we shared personal ghost stories. As someone with a relatively material-forward conception of reality I’m inclined towards a perspective that if we were to say that ghosts exist then they exist in a similar ontological category as, say, Batman, but not as, say, the sofa on which I’m sitting.

However I also believe that the experience of spookiness, of haunting, is a valid, common human experience. It’s further a social experience, as we know that many people together creating a spooky-forward container often have more profound spooky experiences (e.g. Ouija). This experience, to be fully experienced, requires a suspension of disbelief. You have to at least for that moment really believe in ghosts.

Where does that leave me, someone who likes to speak precisely, who likes to be “right”, and in particular hates to be “wrong”. Well I need a container in which I feel like I can believe in ghosts, without being epistemologically committed. Given that container, I hope, I can surrender to the belief and the experience that goes along with it. Hence, “safe ghost space” where we all understand that the beliefs we hold in that space are not a commitment to being the beliefs that we hold. 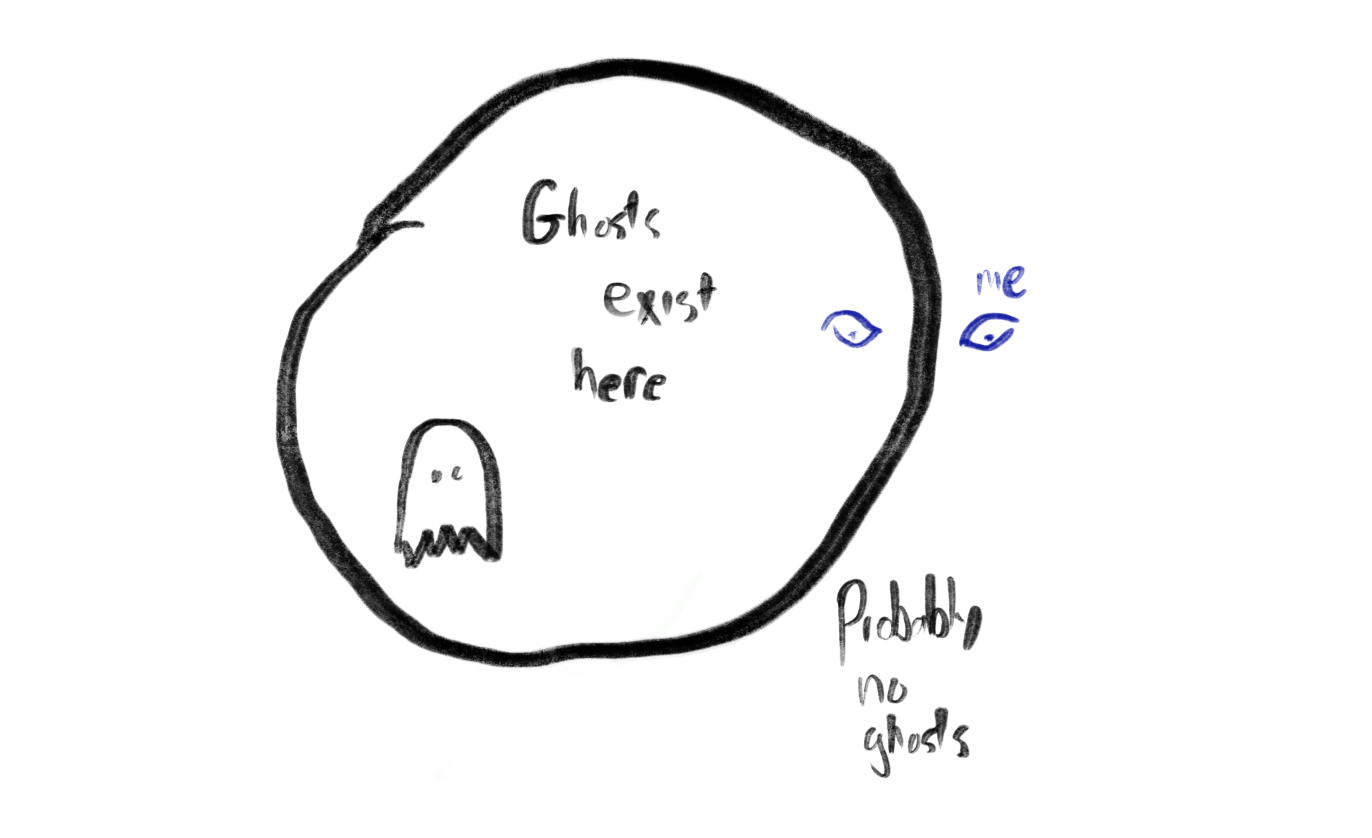 I would like to explore this being a safe ghost space for us. I may not be able to avoid prefaces, caveats, and apologies, altogether, but I may be able to shift the center of gravity elsewhere.

Now is this cowardly? The desire to participate without implication? The desire to touch but not be touched? I think taken to its extreme, yes. We need some accountability for the ideas we put out into the noosphere, we shouldn’t get a perfect wall of deniability. I think, though, that that caveat will come naturally. As much as I’m saying that I want to not be committed to each thought, the fact is by thinking them they contaminate me and the more I think the more I am contaminated. “All that you touch you change, all that you change changes you”.

I have much more I could write about intentions for this space, but I like something you wrote once, we have to “surrender the instinct to use this journal to cover the territory with a map”. I think the potential energy of all the threads desperately asking to be developed, all the started conversations, all the idea flags to be planted, will be a fruitful ferment. I believe that the profound sense of the vastness of the unmapped regions of one another is one of the foundations on which our ongoing love is built, and similarly the with the FàD. If I could write every core question, every defining tension, in one post then we would have a simplistic third energy indeed. No I’d rather probe it, flirt with it, harvest it for insights and then let it rest and regenerate.

So I’ll sign off for now, but already I feel the next letter gestating.