I’ve started this letter in the aftermath of a certain broth conflict, I think you know the one. I think that this is a good starting point for one of our letters however, as it’s through our differences that the parallax of our vantage points allows us to see the world in glorious stereo 3d.

Now I’m notoriously conflict-averse, and in fact one of the seeds of our disagreement was that very avoidance. You asked me to do you the honour of engaging head-on with topics that I know can lead to emotion rather than avoiding the topic, which leads you to the feeling that certain things you care deeply about are “off limits” and that free exchange is censored. I would like to recognize that, and work on while not relishing conflict or disagreement, also not think afterwards “wow I fucked up that upset C I should never talk about that again”, but also not think afterwards “wow I fucked up that upset C I must change my opinion”. Now I feel mixed about that last sentence, because some of that feeling can be the expression of the genuine positive instinct to seek convergence, alignment, common ground. My goal should also not be to dig in, never be wrong, and never modulate my opinion based on the emotional data I get from others. (In which X rediscovers the basics of human interaction).

I’d like in this letter to think a bit more about the shadow side of our explorations into the world of meaning, the world of deep portentous rumbling vibrations (imagine me humming them). I’d like to talk openly about my fears and discomforts, think about the defenses I have built up and think about where they come from, and what value they hold. As we have stepped into these inquiries I have tried to hold those defenses at bay, keep those gates from slamming shut, as discussed at length in my last letter. But just as you asked me to not avoid contentious, political, emotional, issues with you, in this letter I feel called to bring up the contentious side of our forays into the dark woods.

Nothing here will be radically new. Many of these warnings are the mainstream ones that entrench the current order of things. But there may be wisdom in them.

Morality. Oof. Not my favourite topic.

As you recall, some time ago I thought I invented the notion of a framework of three dominant scales by which we judge the world, only to find out that I had been anticipated by at the very least Plato and I suspect thinkers in other histories as well. Oh well, an idea worth having once is worth having again.

The scales as I thought of them were “Truth, Justice, and Beauty”, with each having a representative binary, “True/False”, “Good/Bad” (or right/wrong), and “Beautiful/Ugly” (perhaps consonant dissonant). (Turns out these are called “the transcendentals”, more typically called “Truth, Beauty, Goodnes”, coming soon to the Folie à Deux Spring 2021 Collection).

If you take these as the vertices of a triangle (see image), I believe you can model different people as having a position on this triangle governed by their resonance with each of the three. I would say, for instance, that I have been closest to the Truth vertex (as many with an engineering / scientific bent are), then perhaps Beauty, then perhaps Justice. I believe that much conflict comes between people using different transcendentals as their dominant value system. 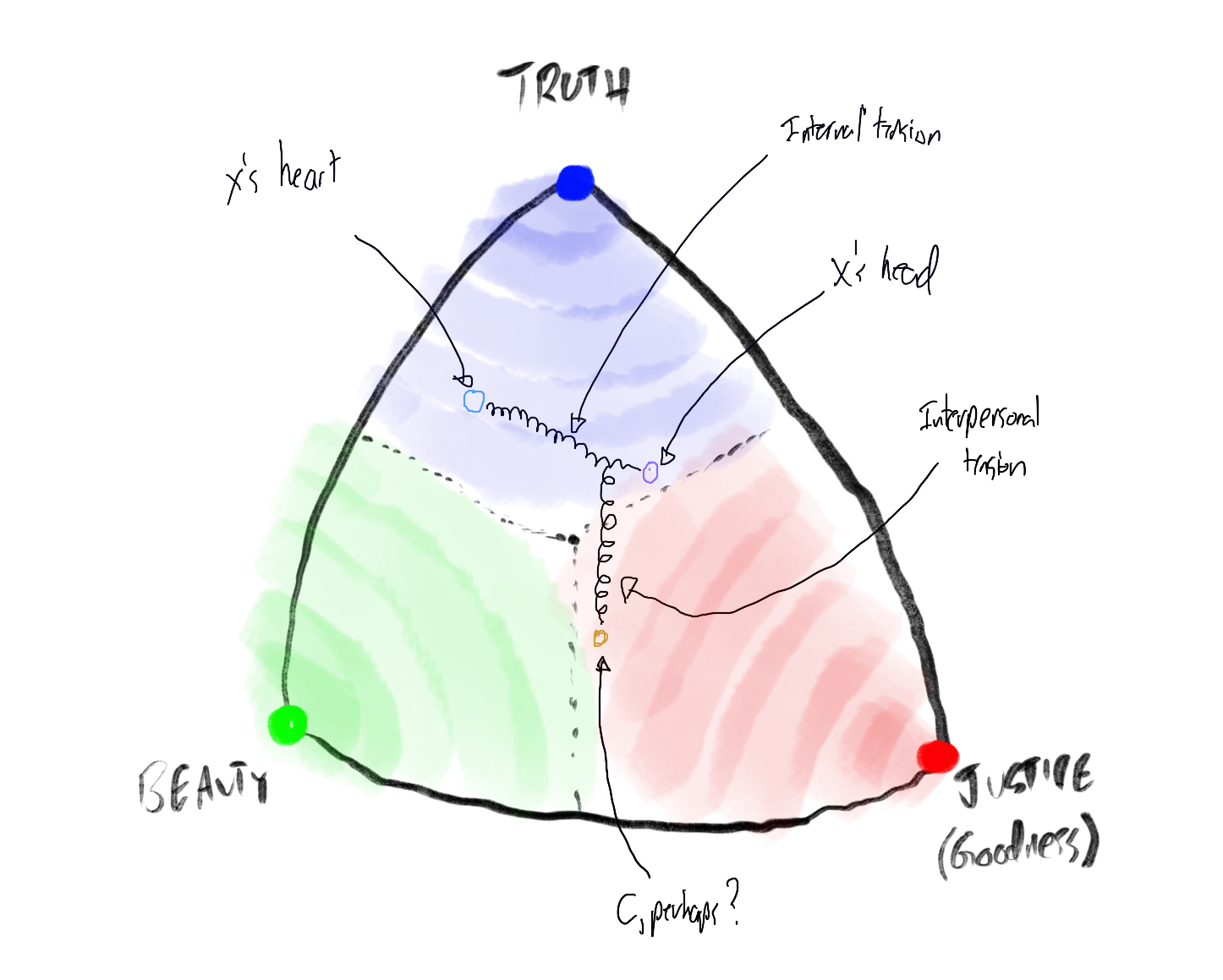 I have been primarily approaching our spiritual inquiry in terms of these first two (Truth and Beauty). My quarrel with religion has often been via Truth, and some of my reconciliation has been to build a conceptualization of it that is compatible with my understanding of Truth (i.e. a more metaphorical, less literalist, interpretation of religious symbology). I have found myself drawn to spirituality primarily via Beauty, as I realize that my over-weighting towards Truth has made it hard for me to experience the subtlety of taste, and this provides a framework for attending to my intuition, and my broader channeling of the zeitgeist (God?).

However my major blind spot in this inquiry has been what, for many, is the dominant feature of religion. Goodness. Morality. What should we do and, perhaps more significantly, what should we not do. The “Thou Shalts” and the “Thou Shalt Nots”. Morality is the axis of Old Testament vengeful gods, of shame and of sin, of righteous crusades, of zealous martyrdom. It’s also the axis of charity, selfless sacrifice, redemptive salvation, and forgiveness.

Now of course, though Goodness is not my primary axis, that isn’t to say that I don’t have a moral compass, or that I find some behaviour objectionable or even evil. But it’s tended to not be my primary lens, and as such I’ve tended to look up on people who wield moral authority with deep suspicion especially when they wield it against people. I have found narratives of “well actually everything is political (moral)” to be true, but false. If it’s “this is a lens by which you can look at all things”, great, if it’s “this is the lens by which you must look at all things”, not so much.

I’m reminded of this quote from James Carse’s Finite and Infinite Games:

Infinite players understand the inescapable likelihood of evil. They therefore do not attempt to eliminate evil in others, for to do so is the very impulse of evil itself, and therefore a contradiction. They only attempt paradoxically to recognize in themselves the evil that takes the form of attempting to eliminate evil elsewhere

This is a lot of theorizing around the very personal core which is that I am not a warrior. Perhaps it’s important that some are, perhaps some progress only comes through righteous conflict. But any time I find myself channeling warrior takedown energy it feels dissonant. It feels like a performance. My god is not vengeful.

I’d like to conclude with one more quote from Carse, from a section where he contrasts “Culture” (an infinite game) with “Society” (a finite game):

Because culture as such can have no temporal limits, a culture understands its past not as destiny, but as history, that is, as a narrative that has begun but points always toward the endlessly open. Culture is an enterprise of mortals, disdaining to protect themselves against surprise. Living in the strength of their vision, they eschew power and make joyous play of boundaries

Society is a manifestation of power. It is theatrical, having an established script. Deviations from the script are evident at once. Deviation is antisocietal and therefore forbidden by society under a variety of sanctions.

I would like to joyously participate in the infinite game of culture, in the spirit of play and curiosity.