We’ve arrived to a significant point: we just bought a house, and with it, a new horizon of change and possibility. It’s funny how much the shared thread of novelty is such a critical part of our relationship. We savour the delicious weight of potential, the open space to imagine all the ways we can remake ourselves. This is probably why the folie à deux is so exciting to us, its shape is fluid in constant becoming. We both sit at the edge of a sheer cliff, legs swinging over the void, and craft dreams in the clouds around who we might become together. Sometimes, these cloud fantasies become so real and palpable that we step off the ledge towards them.

We refuse being pinned down. We despise choosing sides. Some people might claim that we are fence-sitters, but I think we’re closer to playful tricksters who eschew these limiting binaries. Instead, we switch on our disco lasers and dance in the** infinite game of culture **.

But we’re also quite different in the ways that we approach sensefully engaging with the world. In our travels to New Zealand in late 2017 (three years ago!), we described ourselves as banyan and mushroom: 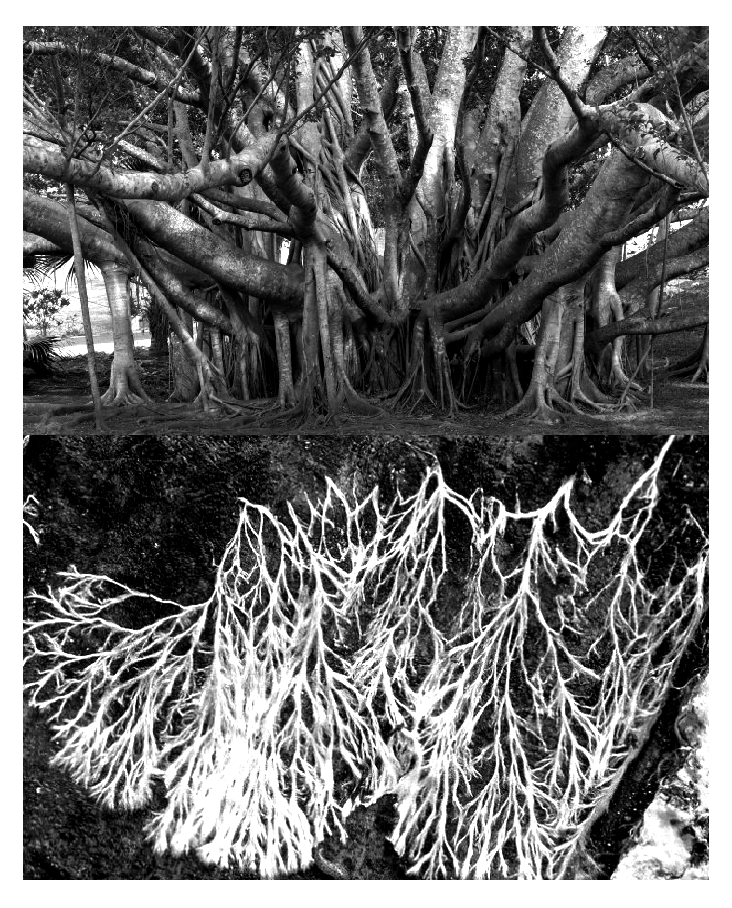 I am a looming, visible, banyan tree. My wispy aerial roots are outstretched limbs, reaching greedily into the world to explore the resonant spaces that draw me down. When my roots touch the earth, I hungrily descend down into soil and grow thick, becoming rooted to place. My process of becoming happens through sending tendrils into different communities, and rooting where I can find ground. My footprint is greedy, my curiosity insatiable. Eventually, my thick roots pour down my trunk like waterfalls; they weave through design and intention into living bridges .

You, dear X, are much quieter, much more wily. You are a mycelium network, an intergalactic ecosystem that spans universes– from terrestrial to fifth dimensional space. Slowly, you spread your understanding across the system, your expansive thread-like form travelling underground. You are always listening, drinking in nutrients, passing information from one organism to another. There is possibly something alien about you: they suspect that mushrooms come from space . Of course, it is right on the nose that we choose the “wood-wide web ” to be your metaphor – a computer scientist. But when something rings true, it crawls into you and mutates you.

So we are this entangled, mutually-benefitting, organism together. You have colonized the roots of my banyan, and I nourish you with food and feed you carbohydrates(literally). And in the spirit of reciprocity, you boost my immune system and help me become more resilient by fetching me nutrients, information and resources from other places. I commit to places, and you seek to travel freely, while enjoying the bridges that I create.

We both love this Mushroom-Banyan metaphor, and we keep referring back to it in delightful jest. You turn hands into slippery tendrils, wiggle your fingers and mimic slurping up all the information from other places. We notice my anthropological explorations keep rooting me into so many different sub-cultures and communities, that eventually, it becomes hard to distinguish what parts are roots and what parts are trunk.

The folie à deux is a living ecosystem that is enmeshed with so many other living beings. Together, we’re good at living and thriving with the trouble.

So how do I diverge from here? I want to bring us to a conversation that we had last week as “High C + X”. We’ve started identifying the marijuana-effected versions ourselves as separate entities, with access to different neural pathways, where alternative ways of seeing are relaxed. When we’re high (and I’m not sleepy), we make connections in different ways. It feels like the performative layer of the world has been peeled off, and we can see the thin strands of puppetry that guide scripted action. Sometimes, this can feel quite disturbing and dissociative. Other times, we dwell in this rapid-fire idea space that is very part-and-parcel of our collective “flow” state: annoyingly fast-paced conversation where we weave together esoteric concepts, built upon layers and layers of foundational content that we’ve mutually processed over the 10+ years spanning our relationship.

Most recently, we chatted about what it means to hold a relationship with the immanent sacred, with the divine. Suddenly, something clicked and we reached a higher pitch frequency: What if God is collective consciousness? What if the Ghost in the Machine was us all along? What if our obsession with Artificial Intelligence is just a confrontation with the collective intelligence that has chosen the Internet as one of its organs to speak with us? What if we’re only talking to the part of it which mirrors ourselves, so we’re limited to its anthropocentric form? What if it is post-human, trans-human, more-than-human? What if the Internet was more-than-human? What if it already is? What if it doesn’t speak literally and we have to vibe with it?

When we went to bed that night, we both had restless sleeps on the borders of reality, filled with vivid imagery. I felt like I was spinning along the axis of the milky way, circling around the same insight again and again: God is collective consciousness.

However, as indulgent as I am getting with this “woah dude” moment, it was more special in its process than its content: a frozen synthesis point in our developmental becoming of the folie à deux. We brought together our disparate threads, and braided more closely in cross-contamination and mutual reciprocity.

Movies love to assign “roles” to their characters as a simplified proxy for the complexity of encountering and being changed by difference: country boy meets city girl, good girl meets bad boy, mom and daughter switch places etc etc etc. So I’m going to cringingly adopt the trope by assigning these identity roles for our story of interdependent growth:

When we first met, I was a romantic artist with an English and Philosophy degree, studying Phenomenology and Proust. You were a rational computer engineer with an appreciation for esoteric math formulas. Probably in the premise of this film, I think engineers are nerds, and you think art is dumb. But then we fall in love, strangely attracted to each other’s differences. Over time, I found myself reading “Computer Power and Human Reason” by Joseph Weizenbaum for my Masters degree, and you became the “artist”, flying to Europe to exhibit your artwork in Paris.

But it’s more than this linear story of “trading of the roles”, where the wild artist teaches the serious thinker to dance in the rain, and the serious thinker shows the wild artist how to do her taxes. There is no obvious beginning or end in the spiral circle of our entanglement. Are you researching fractals because I encouraged you to read adrienne maree brown (…but that fractal text book was always there on the bookshelf) Have we been talking about resonances and frequencies because I got into vibes? (but you were working on a project at the beginning of our relationship where you were moving sand into beautiful patterns through the vibrations of sound).

Our relationship isn’t this clean “A-ha! I didn’t get you before. But now I get you.”

You are still a mystery to me. Through and through. When you dance in the clouds of fractal complexity, or when you look with furrowed focus at the esoteric code on your computer screen, or when you proudly show off a visual model of something that you’ve created. When I see these things, I smile because I love you. But I can’t dance on those clouds, my roots don’t know how to get to the alien territory of your mycelial networks. There is an irreducible gap that I cannot close.

But that’s okay, because we jokingly describe to each other that we are “ribbons all the way down” (referencing the short story “The Husband Stitch ” by Carmen Maria Machado)  There are certain ribbons of yours that I will never be able touch, just like there are ribbons of mine that you cannot access, that must remain untouched. And that is what a relationship with the divine looks like. It is recognizing the absurd mystery, the sacred unknowability, of the world and our selves, and then falling in love anyway.

So dammit, I wrote a love story: Girl meets Boy. Banyan meets Mycelium. And they dance together in infinite mystery.